Molly Taylor is an American singer-songwriter, pianist, guitarist and drummer. Born and raised near New Orleans, Louisiana, Molly has been writing music and performing since the age of 11. Molly released a 7 song EP debut album in 2016 and a 3 song EP titled "Summertime Blues" that was released in 2019. Molly just released a new single titled "Price You Pay" that was released in 2022 and will be followed by her first full length album to be released in in the fall of 2022. Molly has been touring the US full time since 2018 performing her music as well as playing drums, guitar, piano and backup vocals for other touring acts. Follow @mollytaylormusic for information on upcoming tour dates and music release dates. 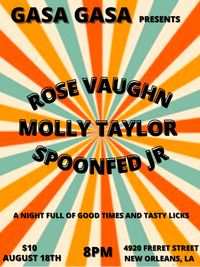 Join us for a night of good times and tasty licks 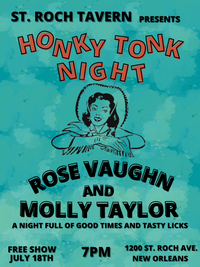 Join us for honky tonk night with Rose Vaughn and Molly Taylor.